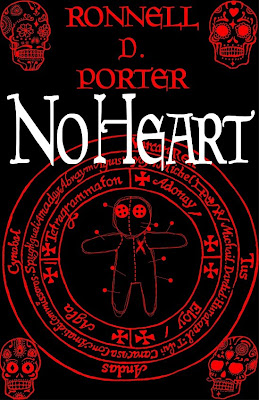 Twenty-four year-old Charlotte Roote is publicly a clerk by day, and an upstanding citizen of her charming little hero township. She lives with her younger brother, Nate, a couch bum who goes through jobs like M&M's. But secretly she's a Hoodoo Woman's apprentice, learning from the same woman that taught Charlotte's mother everything she knew about conjures and rituals before her mother was tragically killed in a car accident.

On the eve of Charlotte's first test she is to successfully raise a corpse from the grave to conjure a mindless zombie slave. But things go awry; the grave had already been fixed by another hoodoo conjurer and Charlotte ends up creating something else entirely; something that the four hoodoo queens of Louisiana have outlawed.
Someone set Charlotte up, and it's up to her to find out who. But while she's left to babysit and tame her creation there isn't much time for anything else. That is, until, a string of murders pops up on her doorstep.

NoHeart is a dark and charming romance between two unlikely people. It's a story full of murder, mystery and sexy mayhem as Charlotte discovers who she is and raises the past from its grave.

Ronnell D. Porter was raised in southern United States and grew up listening to the customs and tales of voodoo and hoodoo from his family. He has two cats named Medea and Jason and spends his time at his keyboard like a dedicated pianist, thinking of faraway places that will fit into his next story.

I attempted to start writing a novel when I was thirteen-years-old on an ancient notebook (the kind that still had the little red rubber nub smack-dab in the middle of the keyboard) but lost that project due to a faulty hard drive. After that I hadn’t really attempted anything again until I was eighteen, and I began my firsty YA Urban Fantasy, The Pocket Watch. I finished the very first draft with an amateur 287,000 word-count. As I had absolutely no clue what a word count was, it came as no surprise to later find out just why I’d received so many rejection letters when I said just how many words there were in my query letters!
But after that, the next idea popped into my head and I immediately went back to writing and I haven’t stopped since.

My genre is always Fiction, usually paranormal or fantasy in nature. I love writing fantasy fiction because I can flesh out concepts that I simply couldn’t share in most other genres. Plus I wouldn’t know the first thing about writing Historical-Fiction, and I would never be able to get through a Non-Fiction novel without turning it into something bizarre by the last chapter.

Well word-count is always in the front of my mind when I write now; I had absolutely no clue how important it was when I first started writing. I usually measure out a story beforehand with a word-count goal and then dividing that by how many chapters I’d like to write and how many words should be in each. NoHeart, my golden goose egg at the moment, is a 65,000 word novel and is my best work by far because word-count was taken into deep consideration throughout the entire project.

The first drafts of my projects are almost always riddled with about ten-times more was’s and were’s than any book should have, and that’s when I go back through and rewrite each sentence so that it shines and shows rather than tell.

NoHeart is Racy; an enthralling and frighteningly sexy terror ride that borders on indelicacy and stylish-flare at the same time.

NoHeart’s title was quite literally chosen for the fact that the charming and hunky male lead, Zachary Tomlinson, has no heart. Its meaning becomes much deeper in the last couple of chapters during the climax of the plot, but to remain spoiler-free I’ll have to pass on bringing up that particular moment.

All of my other works tend to have some sort of preachy theme woven into the story, but NoHeart is simply a fun observation on the different shades of humanity for entertainment’s sake. Some characters are the very definition of human kindness, and some are starkly contrasting monsters of the cruelest grade. I just want readers to enjoy Charlotte and Zachary as much as I do.

The road to publication, whether publishes several times or once, is ever growing, ever changing, and a road that will always be travels so long as writing is one’s career of choice. Recent news, such as Barnes & Noble’s troubles, shows that everyone must be willing to adapt and change with the direction that publication is going, and in many ways that affects just what genre and subject matter I choose to write about; there’s a better chance of being published if you write what you feel will be popular next.

I think we can agree that reading is a given.
Write. So you’ve finished your first novel; start another one. So you’ve finished that one? Write another one. Even writing only one novel in your entire life can be productive (To Kill a Mockingbird, anyone?) but if writing is your passion and what you want to do with your life then you must constantly write. Not only does it help exercise your brain and strengthen your creativity, you’ll find that your prose and flow will noticeably improve.

I would like to thank Ronnell for giving us his time. For more information about the featured author for this week, you can visit: