Like other black birds, the raven (an attendant to the gods of both ancient Greece and Scandinavia) is widely considered a creature of ill omen. It is feared for its apparent ability to foresee death.

A raven is particularity disliked around the sick because their cries sound like "corpse, corpse." It is believed that a raven around someone sick is an omen that the patient will not recover. Scientists suggest that the association with death has to do with a raven's strong sense of smell, which draws it to decaying flesh.

In the olden days, the raven is said to be the favorite disguise of the devil. And eleventh century Norman invaders used ravens as their emblem, which made the bird a harbinger of war.

But according to Welsh tradition, if a blind person shows kindness to a raven, it will help that person regain his or her sight. They also welcome the sight of a raven on the roof of the house because it is said to bring luck to everyone within. In the West Country, ravens are saluted by the raising of the hat, and anyone who robs a raven's nest is said to be punished by the death of a baby in his or her home village. Similarly, the Cornish warn against harming a raven, explaining that the bird may be the reincarnation of King Arthur. 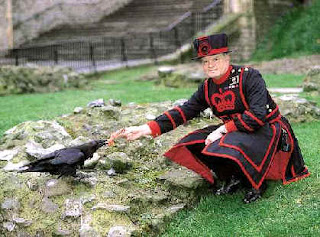 The royal connection is expanded in London, where it is said that the British monarchy and the United Kingdom itself will last only so long as there are ravens at the Tower of London. This well-known superstition is thought to have evolved from the story of Bran the Blessed, a mythical figure whose head is said to be buried on Tower Hill facing France to ward off any invasion of England. The name Bran means raven. And anyone kills of the ravens that live in the Tower will soon die too.

A relatively obscure tradition allows a person to get information about the future by counting ravens. If one raven is seen, sadness is in store. If two are spotted, happy days lie ahead. If three ravens are counted, there will be a marriage. And if four ravens appear, there will be a birth. A variation, however, claims that it is only lucky if one raven is seen, and unfortunate to see any more.

In the business of weather prediction, ravens flying towards the sun are a sign of fine weather. If they are preening themselves on the wing, it means there will be rain. Should they fly recklessly into one another, it means war is coming.