Sounds of Silence, Scent of Freedom in Purple Hibiscus

Since I am an epic fail in the reading department at the moment, I would like to take this time to introduce you to Janice. I met her through Book Blogs. She's been a journalist, English teacher, and, for the last decade, a school librarian. She posts reviews and musings on children's literature that promotes peace, justice, respect, and curiosity. She introduced me to the book being reviewed today: Purple Hibiscus. She was so passionate about the book that I asked her to write this review as a way to spread the word. To find out more about Janice, you can visit her site at: http://booksofwonder.wordpress.com/ 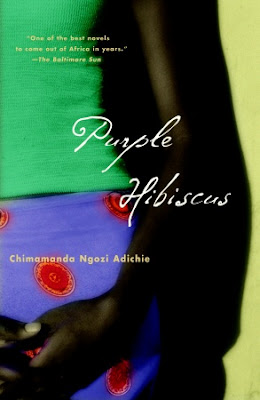 Review by Janice Floyd Durante, at Books of Wonder and Wisdom, http://booksofwonder.wordpress.com/

Purple Hibiscus, is a tender coming-of-age story that reveals the inner growth of a perceptive fifteen-year-old named Kambili. Kambili’s sheltered home in Nigeria appears to be comfortable, respectable, and predictable. In fact, her family life is a hellish trap wrought by her tortured, dictatorial father.

Kambili’s life is laden with a heavy, suffocating silence. In the novel’s opening scene a sudden violent act punctuates the repressed atmosphere. On Palm Sunday, brother Jaja defies Papa by refusing to go to communion. Papa flings a heavy missal at him, missing him but hitting Mama’s étagère filled with her beloved ballerina figurines. As usual, no one directly addresses the conflict. While watching her mother pick up the shards, Kambili reflects, “There were never tears on her face. The last time, only two weeks ago, when her swollen eye was still the black-purple of an overripe avocado, she had rearranged them after she polished them.” Kambili wonders how the others could act normal, as if nothing had happened. Papa was sitting there drinking his tea quietly. Kambili quietly leaves the room.

In her first novel, Adiche has set up an exquisite tension between destructive and constructive forces. When Aunty Ifeoma, the father’s sister, convinces him to let Kambili and Jaja come for an extended visit, the era of Papa’s domination begins to fray. Unlike Kambili’s life filled with silence, servants, and rules, Aunty Ifeoma’s home exudes laughter, music, words, and love. A widowed professor, Ifeoma struggles to buy enough food for the family, yet they work together to make the most of what they have. As Kambili and Jaja experience this noisier, happier, more wholesome family, they realize how grim their life has been. And as they begin to understand and respect their “heathen” grandfather, old Papa-Nnukwu, they plant the seeds of defiance that will erupt in unexpected ways.

The family’s warped confines are mirrored by the increasingly violent political oppression the characters experience. As the plot unfolds, Adichie deftly explores the questions of who will speak and who will be silenced and looks at power and gender through those revealing lenses.
The revelation of how Kambili finds her voice, learns to laugh and enjoy life, and falls in love with a kind young priest, is a story every woman can savor. Like the aunt’s experimental purple hibiscus, with their “undertones of freedom,” this novel is a rare beauty.

Note: Since her debut novel, Purple Hibiscus, Chimamanda Ngozi Adichie (http://www.l3.ulg.ac.be/adichie/) has written the acclaimed Half of a Yellow Sun (2006), and the short story collection The Thing Around Your Neck (2009). She was a 2008 MacArthur Fellow. Adichie divides her time between the U.S. and Nigeria, where she grew up.