An adder is a poisonous snake, which, as the only venomous reptile found in the British Isles, has attracted to itself a host of superstitious beliefs. According to ancient British custom, simply coming across an adder is bad luck, unless the snake is killed immediately (anyone killing the first snake seen in the spring is said to be assured of good luck against enemies in the coming season). Another belief has it that an adder cannot be killed before sunset unless beaten with an ash stick or else rendered helpless by murmuring a special charm (the first two verses of Psalm 68). To trap the snake in the first place, the procedure is to draw a circle around the creature and then make the sign of the cross inside it. The presence of a live adder on the doorstep, moreover, is a sure omen of death in the household, while dreaming of adders is an indication that a person's enemies are plotting against them, according to one ancient Dorset superstition. 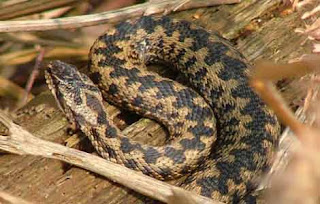 Actual adder bites can be treated, according to gipsy lore, by killing the snake and rubbing its body against the site of a wound or else by coating the bite with a paste of fried adder fat (a course of action described by Thomas Hardy in his novel The Return of the Native). An alternative treatment suggested in the seventeenth century was to hold a live pigeon to the wound until it had absorbed all the poison, or else to slaughter a chicken or sheep and place the bitten part of the body against the still warm carcass (which turns black when the poison has been absorbed). Simpler cures include the application of an ointment comprising rosemary and betony mixed with water or the drinking of goosegrass juice and wine. In Whales, the effect of an adder bite can be negated by leaping over water before the snake has disappeared. 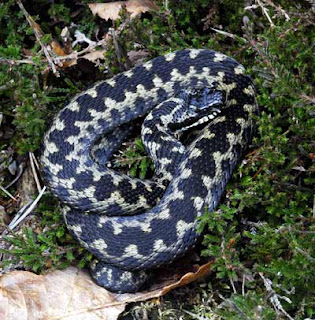 More beneficent is the use of dried or cast-off adder skin, which, wrapped around the affected part, is alleged to have the power to cure rheumatism, headaches, or pricks form thorns and, if hung above the hearth, will protect the whole household from fire and ensure good luck. Swallowing a potion containing powdered adder skin will remedy any problems with the spleen or, eaten as a soup with chicken, will cure consumption. Other superstitions concerning adders include the erroneous but commonly held belief that they swallow their young when frightened and the incorrect assumption that they are deaf because they lack visible ears (they detect sound vibrations through the tongue).