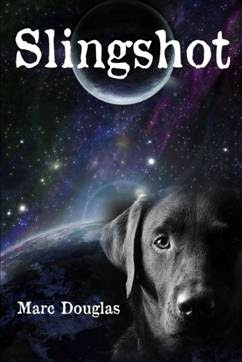 The fabric of the story is woven from many of the issues we face in today’s world. I began work after September 11th, 2001 and took nine years to complete the three book series. Terrorism, environmental damage, economic chaos and inept governments form the foundation of the book, but these conditions are not the story. “Slingshot” is the tale of two flights from Earth that become marooned on an alien planet. Earth will no longer sustain the human race so we have had to search the skies for a sister planet. Our long range telescopes discover our sister planet in the Goldi-locks Zone (not too hot, not too cold). The slingshot effect is discovered and for the first time humans can walk about the stars. These two flights crash unbeknownst to Earth or each other. They have lost all technology in the crashes. The two colonies clash and the series tells of the faith, resolution and courage of these pioneers as they face man made and naturally occurring obstacles.

I reside in Charlotte , NC with my soul mate, Susan. Fortunately, our son and daughter have moved to the area so we can enjoy their company. My Zen master is my dog, Charlie. I have written all my life but upon retirement took the time to hire an editor and publish. After I finished the “Slingshot” series I read another good Dean Koontz book. I was inspired to try my hand at a thriller. “Soon” was the result and although I originally did not think of publishing it my editor really enjoyed it….and introduced my work to EDGE Publishing Company. I had a contract with another large publishing house but decided to cancel that contract and have EDGE do all my books. At the moment “Soon” is being revised. “Blind Sight” should be going to press very shortly and my next book, “The Lieutenant’s Angels” will probably be done by the end of the year. “Angels” was inspired by “The Count of Monte Cristo” by Dumas.

I have written all my life but it was not until I retired from running my own business that I took the time to hire an editor and publish. I have always been enthralled with books that are able to take you to exotic places and unexpected adventures.

I started with “Slingshot” which is the first of a three book science fiction series. I am not really satisfied with a science fiction classification. “Slingshot” looks at today’s issues and projects a future adventure and romance for two long range space missions that become marooned. After I finished the series I was inspired by Dean Koontz to try a thriller. It was so enjoyable to write “Soon” that I have just finished my second thriller, “Blind Sight”. Finally, I have just about finished a rough draft of a classic inspired story, “The Count of Monte Cristo” which has its own story to tell.

“Slingshot” became a very large book and I decided to divide it into three books. Otherwise, no, I let the story tell itself and go where it wants to go.

I like pace and rhythm in my works so I often jog back and forth between subplots and characters to create interest and tension. All of my stories have a mind of their own which always amazes me when done. All my work is PG-13…..perhaps PG-16.2 as I don’t really see the point of needless violence and (in my stories) sex scenes. These things are there but left to the imagination rather then spelled out.

“Slingshot” is the scientific principle we discovered that allows deep space travel. “Soon” is a phrase that the victim/monster repeats over and over. “Blind Sight” was chosen because the antagonist truly does not know himself or reality until he has lost his sight.

I wrote “Slingshot” in response to terrorism, inept governments, economic chaos, and environmental destruction. I hope for several things for the reader: first, it must be an enjoyable ride- second, the adventure and romance is inspiring- lastly, that it is a book that remains with the reader long after he or she is done with it. “Soon” I wrote for fun and “Blind Sight” to be a good old fashion page turner. “The Lieutenant’s Angel” came from “The Count of Monte Cristo” by Dumas. “The Count” was my father’s, my son’s and one of my favorite books. “Angel” is a slice of romance, spiced with some adventurous toppings and served with gusto.

I spent several years looking for a publisher and was offered a contract for the “Slingshot” series with an outfit in Toronto . My editor fell in love with “Soon” and convinced me to approach EDGE Publishing Company with the book. Instinctively I liked these folks, canceled my contract in Toronto and gave all my work to EDGE.

Patience, thick skin, and fortitude. It is extremely difficult for new authors to be published but even harder to become a recognized name. I write stories I believe in and get my satisfaction from readers that express delight in the time they spend with them. If you write only for commercial success I am afraid it would be much less satisfying and perhaps a rougher road to travel. Writing is a personal, and if I might be a bit theatrical, sacred activity. Putting down everyday words onto paper, letting them simmer and steep, coming back to taste and sample the stew is a magnificent thing. To read someone else’s thoughts from another time, but feel as though they are sitting next to you is magical.

To know more about Mark and his novel, you can visit his website at: http://www.douglasnovels.com