The Art of Character Development and Sons of Anarchy 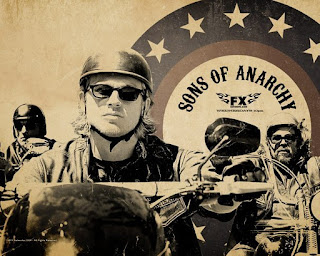 Character development is a tricky thing all writers have to face during the process of creation. We may say we know our characters well, down to what they may be listening to while getting dressed in the morning, but have we really developed said character within the folds of the plot? I struggle with character development. Sometimes, I believe I know my character a certain way and then when I start writing a scene, my character does something totally different from what I had in mind. Note, I may have used the word “struggle,” but I don’t mean it in a negative sense. It’s good to struggle with developing a character because it allows you to explore different sides of a story. Without a character, we don’t have much of a story. Or, at least, that’s how I choose to see it. When I read a book or watch a show, it’s the characters and the way the story is told that keeps me interested.

I’ve heard about Sons of Anarchy for a long time now. I must admit to not paying it any attention until recently: four seasons, to be exact. What made me start watching the show now? Not having anything else to watch for almost a week. No Vampire Diaries. No Secret Circle. No Pan Am. No Once Upon a Time. The list is very long. And once the episodes stop, I go into a really bad case of TV withdrawal. I get restless. I start pacing. So, I asked myself: what can I watch in the meantime? From the titles I’ve mentioned, you might think that Sons of Anarchy is the last thing I would choose. But, as a girl who likes anything with an engine, I said: why not? I started with the first episode of season one on a Thursday and started mainlining the whole series for the rest of the weekend. Seriously, a season a day. Yes, I have no life. But as the biker drama took a fierce hold of me and refused to let go, I learned something: the art of character development.

When you watch Sons of Anarchy, you can’t help but sympathize and fall in love with the members of the club. You know they deal guns (which is illegal) and the law is after them for it, but something happens in you while watching where you start routing for the club versus the justice system. You actually want them to get away with it. That’s what I call excellent character development. When the line between good and bad blurs and you’re not quite sure who’s the hero and who’s the villain it’s an example of masterful writing.

Let’s take the character of Jax. He is the vice president of SAMCRO (Sons of Anarchy Motorcycle Club Redwood Original). Smart. Strong-willed. Compassionate. Stubborn. And complicated. He can even be cruel and cold-blooded when he needs to be. Basically, Jax gets things done, for the club and for those he loves. Notice, I mentioned compassionate and cold-blooded together. How is this possible? That’s character development, right there. It’s not necessarily about showing who the character is, but more like dropping him into any situation and seeing what he does. For example, Jax can go from dealing with a rival motorcycle gang where he acts tough to coming home for the night and cooing at his baby boy, and it’s believable. You believe that Jax can hassle a rival gang and be a loving father to an infant. He begins to feel real. You stop suspending your disbelief and actually accept every decision the character makes. This is what great character development does to the audience.

Now that I’ve finally caught up and am waiting for the rest of the episodes to air, I’m hanging on a ledge. The last episode was a total cliffhanger, so you must forgive my little divergence. I’m a visual learner. Demonstrate something, and I can usually do it afterwards, which is why I watch TV. I know it sounds like such a slacker life, and I promise, I do air myself out once in a while, but watching shows teaches me how to write. I learn how to put scenes together, how to end a chapter where the reader will flip to the next page because he or she can’t wait to see what happens next, and how to develop a character so complex that you would forgive him anything because he’s touched your life in a way most real people don’t.

I may not be making sense at this point. And I may be writing this purely as a fan sucked into the world of SAMCRO. But, I also know I’ve learned something because of this series. I wish someday I get to a point in my writing where I can blur the line between good and bad and show readers characters they will love to hate and hate to love.

Certainly something to ponder while getting to know the characters in your head. If Sons of Anarchy taught me one thing, it would be: no one is inherently good or totally bad. The situations we find ourselves in and the decisions we make while in said situations is what develops character.

Now, if you will excuse me, I think I’ll start from season one all over again.