Hansel and Gretel in Review

I love these fairy tale reboots. There’s Snow White from last year (despite its plagiaristic moments—Mononoke Hime anyone?). Then there’s Jack the Giant Killer (which I have yet to watch). The other Snow White. And now Hansel and Gretel. You don’t have to read my whole review to know you’ve got to get off your ass and watch this movie. But I do appreciate that you read through. It’s the nice thing to do. *winks*

The movie begins with the traditional Hansel and Gretel tale—without the bread crumbs. Brother and sister are left in the woods by their father. They stumble upon a gingerbread house. Yada, yada, yada, and they push a witch into an oven and roast her alive. I know, gory as hell, but you wouldn’t believe the kind of gore in this movie. I’m surprised it’s only PG13. Who at the MTRCB watched this and said: Guy being drawn and quartered, heads crushed by trolls, let’s make it PG13. *shakes head*

Anyway, after the first ten to fifteen minutes, once you hit the black screen that says Many Years Later (in short, an indeterminate number of years later so the actors don’t have to fake their actual age. Yes, I’m talking to you, 42-year-old Jeremy Renner. You’re still hot as hell though, so carry on), the similarities to the fairy tale end. Hansel and Gretel actually grow up to be Witch Hunters. Lord, will the person who thought this concept up marry me? Seriously. You’re already hot in my eyes just for connecting the story of Hansel and Gretel to witch hunters.

As mentioned, the yummy Jeremy Renner plays Hansel, while the beautiful and kick-ass Gemma Arterton plays Gretel. She breaks a guys nose by head-butting him. Okay, okay, Jeremy Renner is kicks-ass too. This does not need to be mentioned. I mean, Hawkeye, William Brandt, Aaron Cross, and Sergeant First Class William James from Robot Chicken? Come on!

I’m not going to sit here and wax poetic about the plot. Although, I get a distinct feeling the trailer I watched last year had a totally different storyline than the movie I watched today. I remember I white witch and a castle. Those who know this to be true, please give me a shout out in the comments section. 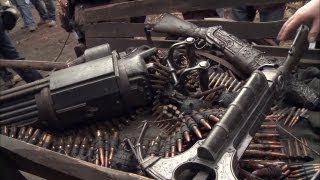 The weapons in this movie puts Skyfall to shame. To shame, I tell you! A crossbow that can shoot in two directions at once? A huge Gatling gun? Come on! Skyfall barely had guns in it. Okay, enough of my angst against the latest Bond film that separates itself from all the Bond films in the history of Bond films. *sigh of lament*

Now, I have to talk about my favourite character in this movie: Edward.

No, not that Edward. 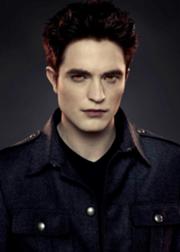 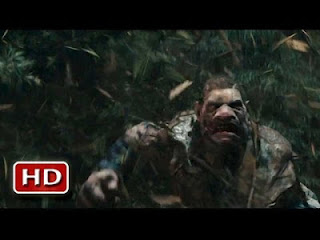 Believe me. The laughs of the women in the theatre when this troll mentioned his name was epic. They were thinking of the first Edward. You know, the famous one. The reason why I love this troll is because he saves Gretel. They become buddies. And there’s something about the strong disenfranchised that tugs at my heart. I want to give him a hug.

If, by now, you haven’t decided if you want to watch Hansel and Gretel, and the fact that Jeremy Renner is in it doesn’t sway you, I have two words: Skinny dipping. Alright, that isn’t really convincing, but I had to mention it because the men in the theatre particularly liked this part of the movie. *eye roll*

Oh and I also have to mention the not so subtle hints about candy being bad for you. When Hansel and Gretel were hostages of the witch in the gingerbread house, the witch actually fed Hansel so much candy that it gave him diabetes. At least, that’s what it sounds like. And from the “shots” Hansel has to take every few hours, it’s hard not to make the connection. Every fairy tale needs a moral right?

Hansel and Gretel: Witch Hunters is a fun reboot to a classic fairy tale. It’s worth one and a half hours of your life. All that leather? All those weapons? And witches you’ve never seen before? I’d watch it again if my To Watch list for this week isn’t so long.

If you’ve already seen Hansel and Gretel kick witchy ass (and what about that gathering of witches during the Sabbath? It’s practically a scene out of HBO’s Carnivàle. If you don’t know what that is, get out of my sight), let me know what you think of the movie in the comments section. What did you like about it? What did you hate about it? Or if you haven't seen it yet, will you?