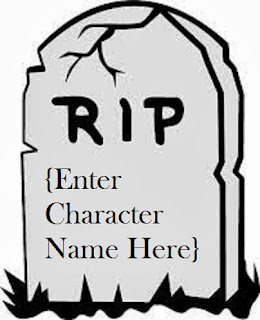 With the internet exploding after the Allegiant release, it got me thinking. What would drive an author to kill a main character? This is a question that authors grapple with at some point in their career. To kill or not to kill? It’s only in fiction where the writer can get away with murder, but it doesn’t always mean it’s the right thing to do.

Anyway, I didn’t want to write this blog post without rounding out my thought process. I know how I feel about killing a main character, but that wouldn’t be enough for this sort of post. Because of this, I wanted to get the insight of other authors. I’m grateful that I did since I learned a lot from their responses.

First lesson? The death should be supported by the plot.

When the story is character driven, killing off the main character is the fastest way to finish the story. Even with plot driven stories, killing off the main character can halt the progress. It’s shocking, and if not done right can be devastating. If the main character has to die, the author needs to set it up early on. Dropping hints work, like creating a world where anyone can die at any minute. The Walking Dead is a great example of this even if it’s not technically a novel. Because of the situation the characters are in the death of anyone is supported by the plot. That means the death of a character would be realistic to the story regardless of the readers’ emotional investment.

Second, the death of a character hinges on whether the author is writing a standalone or a series.

If the novel is a standalone, the investment of the reader can be hours in the least and days at most. This is why Nicolas Sparks can get away with killing a major character at the end of his novels even if he writes romance. Then again, his fans come to expect this from his writing. They know a death is coming from the get go.

If the main character is part of a series, the writer succeeding in getting the readers to invest years of their lives, killing off said character would break reader trust. Of course, George R.R. Martin is known for killing off main characters in a blink. But the difference here is that he writes a compelling story where readers can’t help but forge on. Plus, he has a gazillion other characters to throw into the fray. More to invest in moving forward.

Of course, this justification is not enough to kill off a main character. One of the reasons why we read is to escape. Taking the escapism aspect of reading by killing the MC is just plain rude. Anyway, one of the authors I asked made a valid point. The sacrifice has to be equal to the cost. Just because everyone dies does not mean the main character should. Killing off an MC without setting things up or having the story call for it can be an example of lazy or sloppy writing. I call this the end of the world syndrome. This is where it becomes obvious the writer doesn’t know how to end the story so he or she just kills everyone. Again, if the plot supports the death, have at it. But if not, the author walks a treacherous path.

Fourth, genre has a lot to do with it.

In MG and YA novels, killing off a main character betrays the trust of the reader. It’s the author breaking the contract of entertaining those who chose their novel above someone else’s. Think of it this way, if J.K Rowling killed Harry Potter at the end of the series it’s not just the internet that would explode. Expect mass riots. But, as another author pointed out, Rowling set up the plot in such a way that one has to die for the other to live. If Harry died then evil triumphs and we can’t have that now could we?

In adult fiction, killing an MC can work to strengthen the plot. Someone cited Stephen King’s The Stand. Killing the character seen as the “good guy” in the novel helped drive the sense of hopelessness that usually comes with reading horror—that sense of no one making it to the end.

But in the case of YA Dystopian, where the characters live in a harsh environment, death seems imminent. Even if this is so, Suzanne Collins didn’t kill Katniss. The Hunger Games trilogy does carve out your heart, but it leaves you with a sense of hope in the end that makes all the violence and sacrifice worth it. The novels show that no matter what, good can prevail.

This leads me to my final point: authors writing as readers.

At the end of the day, authors are first and foremost readers. I believe that what we want to read influences what we write. If you’re a fan of happy endings then your novels have happy endings. Nicolas Sparks believes true love is tragic, which is why he kills lots of his MCs. George R.R. Martin sees the death of a character as a way to advance the plot, deepen the storyline.

As readers, the purchase of a novel is a contract with the author. For however many hours it takes to read a novel, we have certain expectations that need to be met. Category Romances are cliché for a reason. Readers know what they are getting when they read CR—a love story and a happy ending regardless of how we get there. When a reader picks up a Thriller or a Horror novel, they know that the safety of the main character is not guaranteed. In literary fiction, reading between the lines is definitely an expectation and a known practice.

I guess, what I’m really trying to say with this post is, writers can do what they want with the story because it’s theirs. But…writers must also consider the trust they are building with their readers. Are they ready to break this trust by killing off a character the readers have invested in? Does the plot call for it? Has the death been set up properly? Is the death just for the sake of shocking the readers?

Going back to my The Walking Dead reference, I dare the writers to kill Daryl. If they do, I will commend them for their courage then I will be looking for their home addresses. It’s the kind of situation where they should be hoping for an asteroid to barrel into the earth after killing him off. *evil laughs*