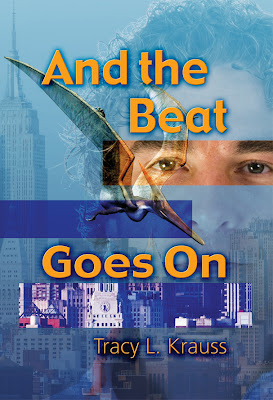 Canadian born archeologist Mark Graham unearths a remarkable discovery while at a dig in the mountains of Zimbabwe – pterodactyl remains and giant human bones buried together. Speculation leads to the possible existence of a mythical race known as ‘Nephilim’, a pre-flood people alleged to have descended from both gods and men.

But skepticism and sabotage delay Mark and his team as the dig site is compromised, putting their discovery – as well as his very life – in grave danger. Deceived and framed by trusted friends and colleagues, Mark struggles to safeguard his findings and protect his reputation in order to unearth the mystery behind the Nephilim.

Tracy Krauss grew up in small town Saskatchewan and has always enjoyed writing, along with many other creative pursuits. She received her Bachelor of Education Degree from the University of Saskatchewan with majors in Fine Art, and minors in History and English. She has lived in many interesting places in northern Canada with her husband, a pastor with the PAOC, and their four children. She currently teaches English, Art and Drama at the High School level and lives in Tumbler Ridge, BC.

Writing was less of a decision and more of a compulsion. I have been writing in one form or another practically all my life, but seriously for 25 years. Most of my author friends report a similar NEED to write. It's just what I do.

Most of my novels fit into 'Romantic Suspense' and AND THE BEAT GOES ON is classed as such. It is also 'Christian' fiction in that there is a strong redemptive element in it, but hopefully it is not preachy. I love a twist and I love suspense, so I guess that it was just natural to write in this genre. I also enjoy a healthy dose of romance, but I'm not much for sentimentality (or what I call 'sappy') so that is where the 'romance' comes in. It is definitely an important element, but not the main focus.

I never actually paid any attention to word count. I have since learned that many publishers are sticklers for anything too long, especially for a debut novel or someone who is relatively unknown. My next release, MY MOTHER THE MAN EATER, (coming out this fall) was too long and I had to slash one whole sub-plot. The tightening process made it better, though, I think.

I thought writers were quirky period.

CONSPIRACY. The book is built around a potential conspiracy that an archeologist faces (and the mayhem that ensues) after a very controversial find.

This book is actually a stand alone sequel, of sorts, to another book I wrote called PLAY IT AGAIN. The first book is the story of Mark Graham's parents, an ex rock and roll junkie and an accountant whose unlikely rendezvous leads to all kinds of complications and subsequent intrigue. Since that book was based on a musical theme, I thought it would be cool to continue Mark's part of the story with another musical title. Also, the title speaks to the ongoing rhythm of the universe, man's connection to the past through archeology, and the inner 'primal' nature within the human race in general. Probably a lot deeper than the 'Sonny and Cher' imagery that might first pop into one's mind ...

I hope they come away with questions rather than answers. I was very interested in the discrepancy between modern scientific theory about the origins of the universe and those held by Christians and other proponents of 'Intelligent Design'. I do not pretend to be an expert on the subject by any means, but have tried to prick the interest of my readers to delve into the possibilities for themselves. (I don't think there are any pat answers, by the way, on either side of the argument.) Also, I hope they come away entertained. That is the bottom line, I think.

About six or seven years ago I started thinking about submitting some of the plethora of stuff I had written over the past couple of decades. After several rejections I realized I still had a lot to learn and began honing my craft. Sometimes we become so emotionally attached to our writing that we can't see it objectively. Since then I have embraced every rejection, critique, review, etc. and have continued submitting my work (and subjecting myself to the cutting edge of constructive criticism.) I also had a lot to learn about how to submit, write queries etc. About two years ago I finally gained the attention of three different agents/publishers and signed a contract for AND THE BEAT GOES ON. Unfortunately, I have learned that finally getting published was the easy part! Marketing and promotion by authors themselves is apparently part of the new world order. :)

Embrace every rejection, critique and criticism and learn from it. Perseverance and tenacity are essential, so stick with it. If you're a writer on the inside, you won't be able to stop writing anyway.

Thank you so much, Tracy, for giving my readers the opportunity to get to know you and your work better. It's a pleasure having you here at Reads, Reviews, Recommends. Dear reader, if you want to know more about Tracy and her work, you can click on the websites below: