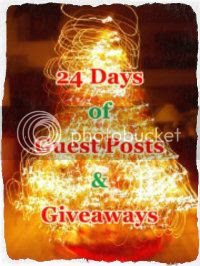 During my regularly scheduled kidnapping, I was given a chance to watch Cloud Atlas. If you haven't seen it yet, it's a total must see. It didn't feel like 3 hours. I had so much fun trying to connect all the story lines--and believe me, there's a connection to each and every one of them. Like the characters existing together separated by time, today's post brings the author and her character together in a wonderful...er...maybe not so wonderful...Christmas experience. We're taking a different turn with the post today, folks!

But before we get into what Cindy has in store for us, the great Rafflecopter has spoken and chosen the winner of Justine's Recaptured Dreams giveaway.

This is not a drill.

The winner is our very own Jennifer Lane!

Who am I to gainsay the great Rafflecopter randomization?

While she celebrates her win of a copy of Recaptured Dreams--a novel I'm totally putting on my TBR list--make sure to join Jennifer's giveaway and check out her timely advice for keeping sane during this holiday season. Drinking is involved!

Then revisit how Victoria's son experienced a Christmas miracle involving a balloon and Santa. Make sure to have a box of tissue handy because this post will have you tearing up. It's so sweet.

And while you're already scrolling down, take a second to list Autumn's gift giving advice. She takes "it's the thought that counts" to sweet levels.

Afterwards, take a break with your favorite holiday drink. Jus shares a yummy one that she makes a point to drink when the holidays roll around.

All the giveaways for these posts are still on going, so make sure to get your entries in. Jus's giveaway has a few hours left. Join now before it's too late!

Okay, on to today's special post from the intriguing Cindy Young-Turner. She shares a holiday experience with one of her characters.

Take it away Cindy and Sydney!

A Thief of Hope Christmas

What seemed like a fun idea at the time, spending Christmas with the heroine of my novel, Thief of Hope, turned into the holiday from hell. I admit, I adore Sydney. She’s been with me a long time. She’s the kind of person who, despite her many faults, endears herself because she’s faced adversity and pulled herself up by her own bootstraps, so to speak. You can’t blame her for being hard to get along with. She grew up on the streets of a not so nice town, surviving as best she could and learning to trust only herself. Some habits are hard to break.

Spending my favorite holiday with a girl in need of some love and cheer should have been the perfect gift. First problem: Sydney has no idea what Christmas is all about. There is no Christmas in the world of Thief of Hope. It’s a medieval-like fantasy world, and although there is a religion similar to early Christianity, along with magic and the faery folk, Sydney doesn’t think much of the church. There are seasonal holidays, like the summer and winter solstice, and harvest celebrations, but Sydney spends most of her time worrying about surviving day to day. She doesn’t have much to celebrate when the choices are sell your body on the street if you can’t pick enough pockets or go hungry.

Sydney accepted my invitation for the holiday. I could have said she didn’t have a choice, but often my characters do things I don’t expect. She was at first overwhelmed by a house with sparkly decorations and a fragrant Christmas tree. Why anyone would put a tree indoors and decorate it was beyond her. More impressive than the decorations was the food. You can imagine her daily fare is not much to speak of. She does get to attend a couple feasts over the course of the book and shows that she can eat much more than one would expect of someone with her slight frame. I made sure I had plenty of food on hand for our Christmas dinner--turkey with all the trimmings, sweet potato biscuits, green beans, mashed potatoes, pumpkin pie. It was barely enough. That girl can eat! I guess when you’re deprived you make the most of whatever you can get. She really couldn’t get enough of the gingerbread cookies. Or the wine. More than a glass or two and I start to get a bit loopy. Sydney can go through a bottle herself and you’d never be able to tell. She also got into a belching contest with some of the younger cousins, who were highly amused. The older relatives looked at me as if I’d invited a wild animal to dinner.

My first inkling of trouble should have been when Sydney started muttering about the obscene amount of food and how so many people have so little. Not that I don’t agree with her, but it was Christmas. I just wanted to enjoy the moment and the gluttony without the guilt.

From there we moved on to the gifts, and that’s when things got worse. It’s hard not to go overboard with Christmas. These days the Christmas season begins just after Halloween and the frenzy continues to build to Black Friday. (Good thing I didn’t take Sydney to the mall.) Sydney has rarely received any gifts in her life. Her most prized possession is a pair of boots that were a gift from Edgar, her guardian--an extravagant gift, even though she needed them. When Edgar was hanged for fighting the oppressive Guild that controlled their town, the boots became all the more precious to Sydney. To her, a pile of gifts wrapped in pretty paper under the Christmas tree was simply unimaginable. I had restrained myself and picked out a few gifts I thought Sydney would appreciate: a warm hat, gloves, socks, and a sweater. She was touched, but when all the other presents were unwrapped, she was appalled by the amount of frivolous stuff we received. Not that she had any idea what most of them were (not much call for electronics in a world still in the dark ages), but it was clear that these weren’t items we needed. In fact, in some cases they weren’t even things we wanted.

Sydney didn’t hesitate in calling us out on what she felt was a gross injustice. I think she got in a screaming match with some of the relatives. Kids were crying, Sydney was muttering “bloody hell” and not the least bit interested in the beautiful hand-made alpaca socks I’d picked out for her, and I went for a third glass of wine.

Not the kind of holiday cheer I was expecting.

Sydney decided to return home not long after and missed a second helping of dessert. Later on that night I discovered a whole pie was missing and wondered how she’d managed to filch it. She is a decent thief, after all, and I couldn’t begrudge her a pie. And those missing silver spoons? I’m going to pretend we never had a full set.

After promising the family never to invite a fictional character to another holiday, I thought about Sydney’s reaction and realized she had a point. Maybe it’s a cliché, but the beauty of Christmas is family and friends coming together. It shouldn’t be the gifts and the materialism. And Sydney was right about the idea of helping those less fortunate. It’s an admirable sentiment and I made a vow that any gift left unused was going to the next charity drive.

But I’m afraid you’ll have to pry that Kindle Fire from my cold, dead fingers.

p.s. Next year maybe I’ll invite Willem. He’s going to be king, so he’s a bit more tactful than Sydney. I think he’ll get along great with the relatives and he’ll be impressed when we spend half of our day volunteering at the homeless shelter.

Oh, Sydney! *shakes head* But she does have a point despite the missing pie and spoons. *laughs* Thank you so much for sharing your holiday experience with Sydney, Cindy. Some lessons learned, chief among them that Christmas is about family and getting together. If I were to invite a character over for Christmas, I think it would have to be Luka from Taste. Then again, because of his hotness and all-around playful nature, I wouldn't know what to do with myself. Might even become a puddle of mush at the end of the night.

What about you? Who would you invite to your holiday celebration?

While Cindy figures out how many spoons are missing from her not-so-complete set anymore, let's take a second to get to know her. 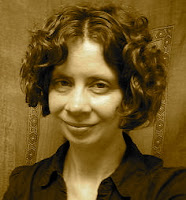 Cindy Young-Turner has always been an avid reader and became fascinated by mythology and Arthurian legends at an early age. She quickly decided she enjoyed creating my own worlds and characters and set to work writing her own stories. She believes genre fiction can be just as well written and valuable as literature. The universal themes of love, hate, revenge, and redemption are present regardless of whether our characters live in the distant future, on other planets, or in fantastical realms.

Please feel free to stalk her at the following places:

And when you get back from your stalking mission, make sure to check out Sydney in Thief of Hope: 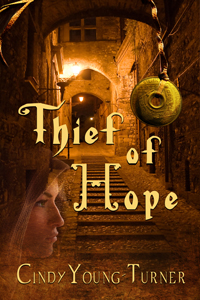 Sydney, a street urchin and pickpocket in the town of Last Hope, has managed to evade the oppressive Guild for years, but there is no escaping fate when she's sentenced to death for associating with the resistance. After she's rescued by a wizard, Sydney is forced to accept that magic—long outlawed throughout the Kingdom of Thanumor—still exists, and the Tuatha, a powerful faery folk, are much more than ancient myth and legend. When the wizard offers a chance to fight the Guild and bring Willem, bastard prince and champion of the Tuatha, to the throne, Sydney embraces the cause as a way to find her own redemption. But Sydney's fear of the Guild, distrust of authority, and surprising connection to the Tuatha threaten Willem's success. Can she untangle the strange threads that entwine her life not only to the fate of the kingdom, but also to Willem himself?

And when you grab your copy remember Journey to Hope, a Thief of Hope prequel that is part of Crescent Moon Press’s Little Moons line of ebooks, will be available for Kindle in mid-December.

Your copy is a click away:
Amazon
B&N
Kobo

It's time for everybody's favorite part.

Count your silver, Sydney's in town!