Some of you might have caught my tweets about a super secret project for a few weeks now. Well, I finally completed the rewrite and sent the manuscript off the my awesome editor and amazing critique partner. To celebrate, I would like to reveal a little bit about this project. 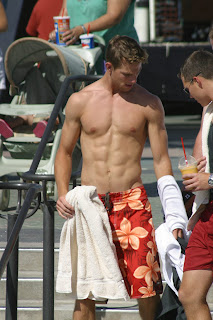 He is the delectable hero of my latest novel coming out from Omnific Publishing called Romancing the Bookworm. Please watch out for its release this summer.

And just because I'm on cloud nine, here's a little snippet of the story told from Xavier's point of view.

Holy shit! She passed out. She actually fucking passed out at the sight of me. What the hell was going on here? Last time I checked, I hadn’t transformed into the Elephant Man. This wasn’t the way I thought our first meeting would go. I shook my head in disbelief as I dropped to my knees and shielded her from the harsh mid-day sun. Mostly, I blamed the stupid tent she was wearing. No one should wear that much when at the beach forchistsakes. She looked like kelp swallowed her whole from all that fabric.

When Hudson left for the bus stop, I’d lost my appetite. The nerves I felt that morning twisted my stomach in knots again. I finished my beer and slammed the bottle on the bar. I quickly went through the different scenarios I’d cooked up for this next phase of the plan. The First Meeting. Very important stuff.

I left the Shore Shack and watched out for them on the beach. I knew Hudson would bring them to the Shack eventually. The second I spotted her walking behind the twins, rubbing sunscreen on her arms, my heart stopped. This was it. The perfect scene flashed before my eyes. I rushed into the water until I was completely submerged. Then, almost reenacting the way James Bond waded out of the water in Casino Royale to the letter sans my dignity, I walked out of the water. I knew her eyes were on me. I’d seen her stop and stare the second my head broke the water’s surface. I had to force myself to keep going. I kept reminding myself of the plan. My reputation had to take one for the team. I’d made up my mind and nothing short of hospitalization would stop me.

I thought everything had gone well. I’d waded out of the water while keeping a straight face. Even from a distance, I saw her eyes rake over my body. I knew I had her when I got close enough to see her blush and swallow. In my head a small voice actually said this might actually work.

I celebrated too soon.

After Hudson made the introductions like we were all meeting for the first time—the jackass could have played things cooler—I reached out to shake her hand. God damn if my fingers didn’t twitch at the anticipation of actually getting to touch her. And then her eyes rolled into the back of her head.

Let me know what you think in the comments section. I'm super excited about sharing the rest of Xavier's story with all of you. Get ready for one hot summer, ladies.

More exclusive stuff from everything I'm working on to come. Stay tuned!